It has been a long time since I started making music and I have been hearing lots of voices berating the complexity of today’s musical tools, hankering to an idealised past where everything seemed pure, simple and perfect. These voices forget how much less accessible those tools were, and also how much more limited the available range of sounds would be. Of course the ultimate result depends on the creativity, originality and ideas of the musicians involved, but, for me, having a wider range of sounds to choose from does help, as long as the artist has a clear vision of what is to be accomplished.

The standard line of thought dictates that external filters belong to a synth-based setup and guitar pedals belong to a guitar pedalboard. Here I tried to use my gear in slightly different ways.

This first example is my Fender Jaguar plugged straight into a Waldorf 2-Pole filter and recorded straight to my audio interface. The filter cutoff is controlled by a standard expression pedal.

Through the years I have tried many wah-wah pedals, but I have never come across anything that would sound as vocal as this. Remember,  the sound here is completely unprocessed and one can only imagine the possibilities with the right sort of drive and reverb – only to start with.

Many people have been using drive pedals to beef up the sound of a monosynth and help it cut through the mix. For the next example, I have chosen to put my monosynth through the Jam Waterfall – the pedal that made me put a chorus back into my pedalboard after a good couple of decades. Here, a Doepfer MAQ 16/3 is sequencing a Roland SH-101 and the sound features a triangle waveform:

Nice, I know, nothing beats pure analog and all that. Now, the same through the Waterfall. Both speed and depth are at zero at the start of the clip, than I bring them up to about three o’clock and four o’clock respectively:

Even at a zero setting the Waterfall makes the Roland sound bigger altogether. To my ears the rich, juicy modulation coming later on sounds absolutely glorious, making me sometimes think I should just leave the Waterfall on all the time.

Now the same example, this time using a square wave. First without the Waterfall:

And now with the Waterfall:

The SH-101 sounds definitely richer and wider through the Waterfall. Think also that the Waterfall settings can be instantly tweaked, making the whole setup extremely easy to use. More pedals would be just an extension of what would ultimately be one even bigger, knobbier synth.

Lots of synths and synth-based setups have their own, built-in, effect processors; however a lot of the time they are only designed and built as an afterthought and they are no match for one proper, dedicated unit that does one particular job (modulation, in this case), particularly well. It is the same analogy as the built-in sound input of your laptop, featuring a pre-amp that costs one dollar compared with a proper audio interface featuring a pre-amp that costs fifty dollars. Not to mention that sometimes those effects cannot be instantly accessed and tweaked live.

Where there’s a will, there’s a way: filters can be mounted on a note stand and controlled with an expression pedal, living happily side-by-side with a guitar pedalboard. Synths, drum machines or software through some audio interfaces can send triggers to some guitar pedals. A guitar pedal, or even a series of pedals in a pedalboard, can be patched through the Aux sends and returns of a mixing desk to process more than one synth, even those that have stereo outputs. Aux levels help you create a balance not possible with a direct, serial connection. Software like Logic Pro and Ableton Live make using external processors a doddle; lots of software synths are absolutely fantastic, but a symbiotic relationship with some external processing can make them live and breathe in ways never before thought possible. Any decent computer setup today would have negligible latency levels, so latency would not be an issue. Be prepared to have lots of adaptors close at hand and always be careful with impedance matching and signal levels, impedance matching alone can make the difference between success and complete disaster.

Yesterday is not here

If I am allowed to make a comparison with that dark and distant past, one good thing is that today we are lucky to have a much wider choice of sound sources. The choice and availability of guitar pedals has grown exponentially this century. Then same goes for synth modules, as the growing success of the Eurorack format has demonstrated in the past few years. There are more pedal and modular synth manufacturers than ever before and the idea is always the same: to shape and control sound as much as possible in order to turn an artistic vision into a reality and find new ways of expression.

Having started out as a guitarist and then moving onto the world of electronica, I never had any qualms about keeping things separate and not trying to mix and match. At the end of the day, there is no ultimate gear setup and we all have to restrict our setup and set of choices for practical purposes. Many of my musical heroes made the most of a limited setup and were never afraid to experiment to try to make the most of whatever they had. Think of how much great music has been recorded with just one microphone, created in far less than ideal conditions. Be grateful for what you have.

My pedalboards have always been to me what I would call modular guitar setups. Just like as with  a modular synth rig, I would always have the freedom to mix and match and change the signal order. Perfect sound is not meant to be an elusive ideal, neither something carved in stone – for me, the challenge is to create the perfect sound for a specific occasion and create something that works. 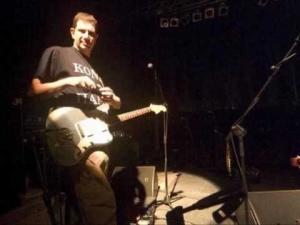 From good old rhythm and blues to abstract electronica and almost everything in between, guitarist and electronic musician George Bandoek Apostolakis has been navigating comfortably through different styles with equal flair and ease.

After a long and distinguished career in the Greek music scene (with a distinctly non-traditional flavour, one would add), George has been broadcasting ambient soundscapes from somewhere in the frozen wastes of Finnish Lapland where he has been living for many years. His fascination with new and different sounds still shows no signs of abating. Some of these can be heard on soundcloud.com/bandoek and bandoek.bandcamp.com